Looks like it’s about to be a food week! Who’s complaining? Last month, I took my very first vacation from work and visited Puerto Rico and South Florida. I wish I could say I did more than eat or shop, but it would be a LIE. Would you believe me if I said I went to Chili’s twice in one day? I was obviously living my best food life *haha*; it was also right next door to the hotel. Chili’s happens to be one of my favorite food spots while I was living overseas.

For my Non-American readers, Chili’s Grill & Bar is an “American casual dining restaurant that features Tex-Mex style cuisine.” Of course it’s founded in Texas. I developed a little love relationship with Tex-Mex food while living in Texas for THREE years.

As the name says, it’s a bar so generally there’s a large bar space with multiple television screens showing sports. It also happened to be World Cup time so you know what the atmosphere was like. On the first visit we opted for a booth away from the noise, while on the second time we got a table with high-chairs near the bar. Even though we were in a booth, they still had access to television screens (major plus). BTW this was a Chili’s in Puerto Rico.

Yes, I had to throw in a vacay pic

The first time we went to Chili’s was for lunch, and lately I’ve been having an attraction to BURGERS, totally random but nonetheless I gotta feed my cravings. There were so many options; after a hefty debate, I settled on the Guacamole Burger, while my sister had the Mushroom Swiss Burger.

The service was top-notch, because in no time we were ready to dive into our burgers.

This burger was packed with flavor and I truly believe the guacamole made everything one thousand times better. I was stuffed, but still didn’t want to waste anything. There were caramelized onions, sautéed bell peppers, a cumin-lime sour cream and Monterey Jack cheese. Writing this post is making me have SERIOUS withdrawals.

The burger was bigger than her *lol* She also said it was very delicious.

By this time I felt like I ate enough meat, not only for the day but for the week (this was on a Saturday). Thus, when we got seated I went straight for the seafood section. If you’ve been with me from the beginning you’d know how much I love shrimp, so it was without a doubt my first option. Also, since I was missing Texas a bit I decided on a Shrimp Margarita Bowl for the night. 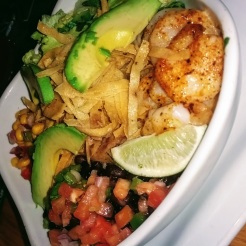 This bowl had in chipotle shrimp, pico, greens (lettuce), Mexican rice, corn, black bean salsa, avocado, shredded cheese, tortilla chips and cilantro. The only thing I disliked about the bowl were the tortilla chips which I ended up picking out. Other than that, I was in love; especially when everything was mixed together. I wonder how come chipotle doesn’t have shrimp as a meat option.

Anyway folks, that’s all for now!
Where was your latest restaurant outing?